Hulda Hakon has been a major figurehead of the Icelandic art scene since the 1980s. Briefly a member of the East Village scene in New York, Hakon returned to Iceland early in her career to immerse herself in the artistic influences of her home country. Totally Iceland’s Yanshu Li sat down with Hakon to talk about the particularities of Reykjavik’s art scene, the 2008 financial collapse, the role of tourism in her artwork and more.

You’ve spent most of your art career in Iceland. Do you believe there are defining characteristics of the Icelandic art scene?

It's the job of the observer who comes from the outside to pinpoint specific Icelandic characteristics in art. We are very different artists, so it’s not very homogenous.

This is partly due to the fact that we have to go abroad. If you want to be a strong artist, you can’t just stay here. … I think that it’s been very good for Iceland, that people of my generation all had to go abroad to study. That’s been good for the variety of the art scene. 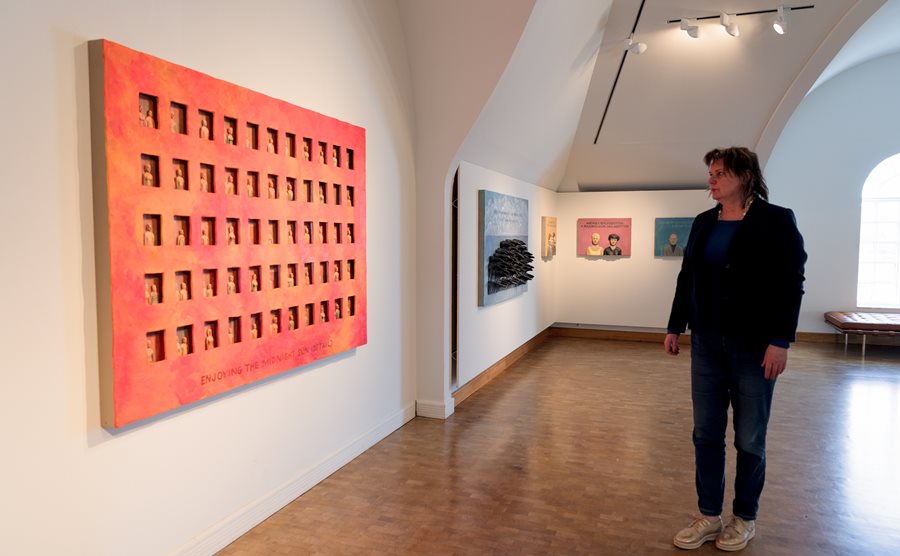 So do unique aspects of Icelandic art become more clear to you when you’re abroad?

I think so, yes. In the 19th century, we had a very loved [Icelandic] poet who lived in Denmark. His name was Jonas Hallgrimsson. He wrote very beautiful, nationalistic poems about how beautiful Iceland is. But he was always in Denmark writing these poems! He got distance, and then he could think about it. I think that’s what happened to me when I was in New York — I started to think very much about Iceland.

Yes, you were part of the East Village art scene in New York for five years in the 1980s. What did you realize about Iceland while you were in New York?

I realized that you travel with yourself and your experience. It never leaves you. When you’re in New York, it’s fake if you try to imitate other artists. You have to stay yourself. To be myself, I would use a combination of modern living in New York and my strong background of Iceland heritage. 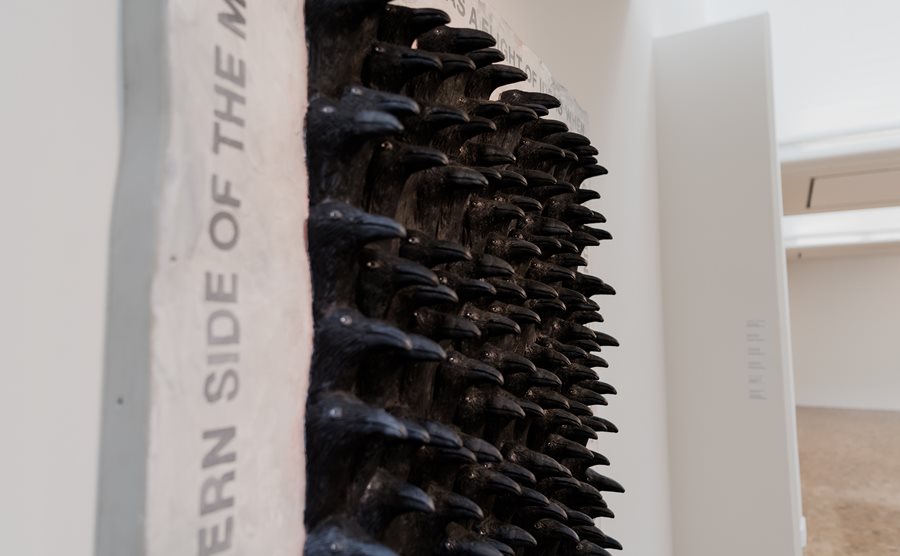 How has Iceland’s cultural legacy impacted your artwork?

We just don’t have a very long history of fine art in Iceland. … Very few people were painting, like maybe three or four people, until the 19th century. … We didn’t have the material to make sculptures … but we had the language to tell stories. That part of our culture is very strong. I always like to combine stories with my work.

Which art movements were you influenced by as a student in the 1970s and 80s?

I went to the new experimental department at [the Iceland School of Arts and Crafts]. There many of my teachers were from the Fluxus movement.

A lot of [Fluxus] has to do with playful use of language and an easy attitude. The most famous person associated with Fluxus is Yoko Ono, and Nam June Paik from Korea. I was very influenced by Fluxus because I don’t like art to be put on a pedestal. I want it to be a part of everyday life and to express everyday life. 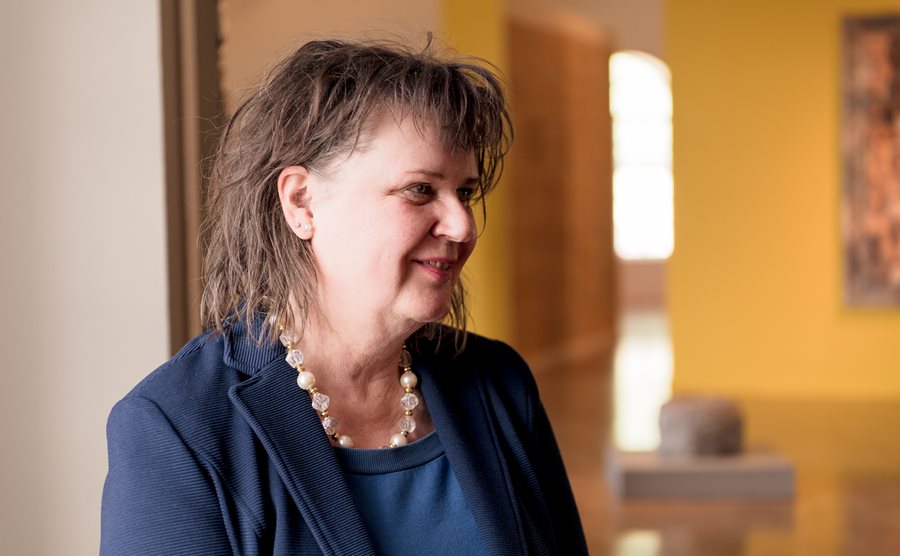 Why did you decide to return to Iceland after working as an artist in New York for five years?

What do you miss about your life and career in New York?

I mostly miss the opportunities [in New York]. … Every time you got into a show, it was a huge success. It’s different in Iceland because everybody’s already known. It’s not as much of a challenge. I like the challenge of big cities. That’s why I like to exhibit here in the summertime — I get more viewers from all over. I like to get exposed. 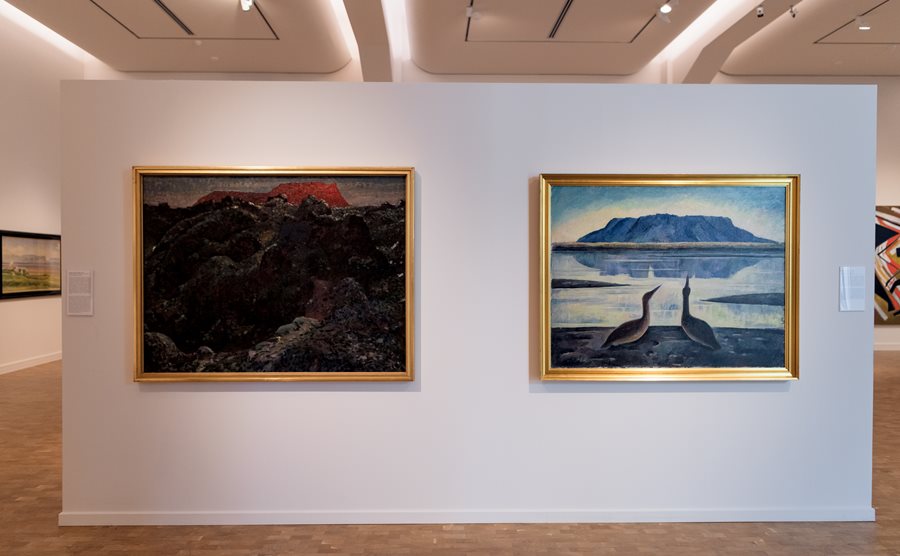 You owned the coffee shop Grái Kötturinn in Reykjavik for almost 20 years. It became a hub for a lot of artists and writers. Did those people impact your work?

Yes, they brought me stories. … Before the financial collapse in 2008, everything was blooming and a lot of businesspeople were attending my coffee house. I would always hear this word: ebita, ebita, ebita. I asked a businessman friend of mine, what is this ebita? He told me what it was and then I made an exhibition called “Ebita” [Earnings before interest, taxes, depreciation and amortization].
That was in 2006 and the financial collapse was in 2008. But [even then] I felt like there was something strange in the air.

Has the tourism boom in Iceland in recent years affected the way you see the country?

No, the country is so big that you can always find a place where you are alone in nature. … With art, you’re happy when people like what they see. [With tourism], you’re happy if tourists like your country.

I make pieces that [depict] people standing very close together. When I started making them, it was about how everybody knows everybody … and everyone is connected. This friend of mine who’s a businesswoman bought it. She put in the lobby of a hotel. Then, after the collapse, I sold many pieces like it abroad, to foreigners, who would stay in her hotel. It helped me through the collapse. .. The people who bought it said they liked it because it’s like togetherness. They found some kind of warmth and security in the piece. 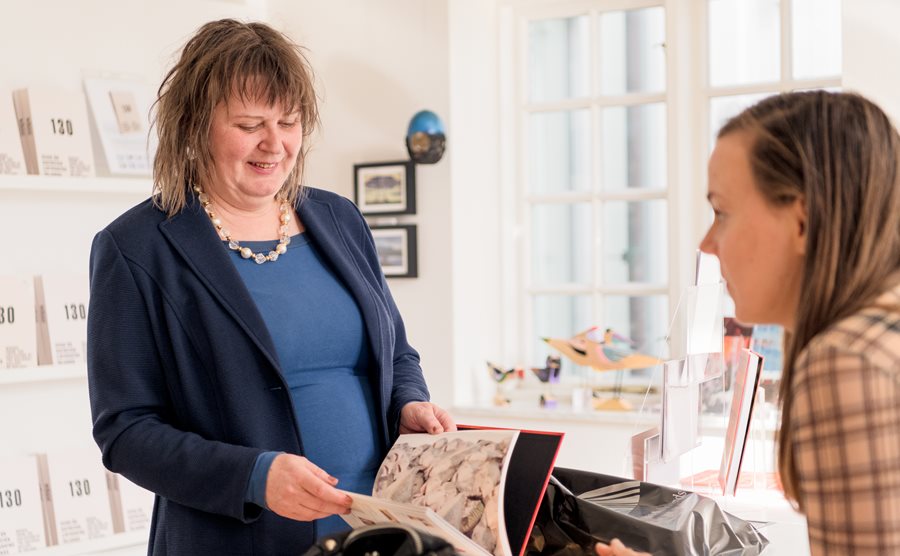 Does the enormous tourism boom in Iceland in recent years affect the way you see the country?

No, the country is so big that you can always find a place where you are alone in nature. … With art, you’re happy when people like what they see. [With tourism], you’re happy if tourists like your country.

I make pieces that [depict] people standing very close together. When I started making them, it was about how everybody knows everybody … and everyone is connected. This friend of mine who’s a businesswoman bought it. She put in the lobby of a hotel. Then, after the collapse, I sold many pieces like it abroad, to foreigners, who would stay in her hotel. It helped me through the collapse. .. The people who bought it said they liked it because it’s like togetherness. They found some kind of warmth and security in the piece.

Why are there no art critics in Iceland?

My friend was an art critic before he became the director here at the National Gallery, and he had to take himself out of the phone book. People would call him drunk and yell at him. Maybe it’s because [Iceland’s] so small and it’s difficult to have criticism. It becomes personal. 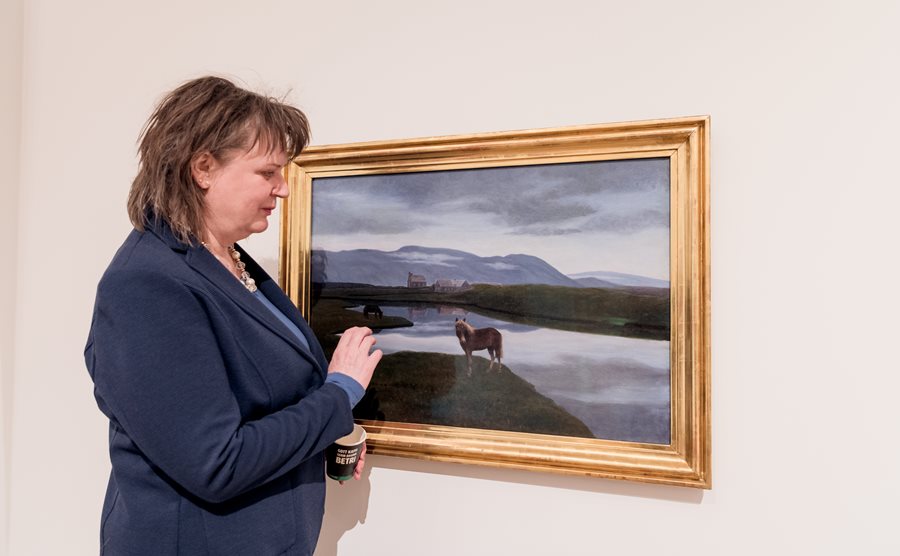 I don’t know, I’m not so much part of the art scene. I used to be but I sort of took myself out of it. I have friends who are artists, of course, but I always feel like a herring in a barrel. It’s so small. I find it better to know people from all walks of life. In Vestmannaeyjar I know sailors and teachers. I like to be around different people who know something I don’t know.

Have any particular artists or art movements influenced your work?

I’ve been influenced by Fluxus, and by Dieter Roth throughout his career.

When I was living in New York, I worked as a guard in PS1, an art place run by the MOMA. I sat in corners and scolded people if they tried to touch the artwork. This was around 1983. There was an exhibition of ex votos, religious pieces from Mexico. … They were small paintings painted on thin metal, like car metal. And it’s an offering for the church. If you were walking at night and there was a wolf and he attacked you, you would say to the saint “Please help me if I will get out of this and the wolf will not kill me I will donate the painting to the church!” There was an exhibition of all kinds of little miracles. That influenced me very much. … I like the combination of something visual and a small story. 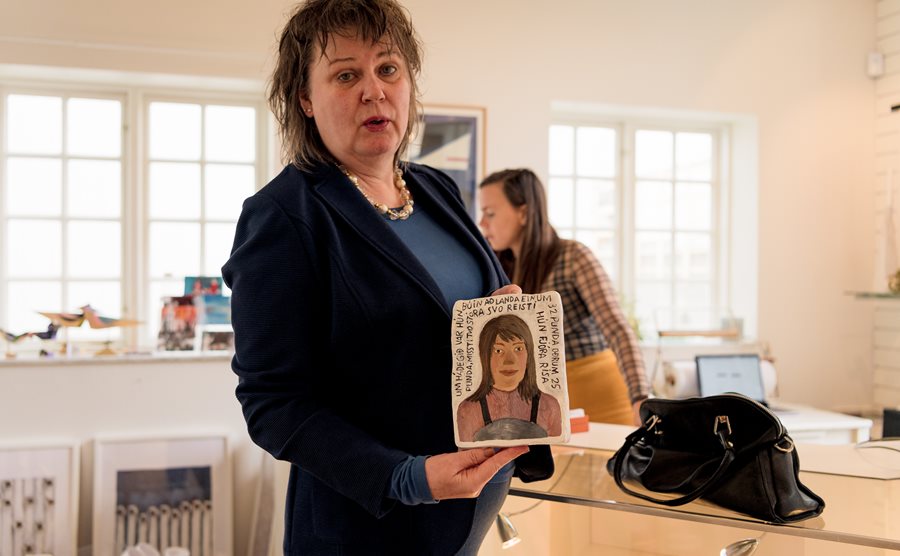 What are you working on now?

Now I’m working with these three-dimensional negative forms and painting them. I made a small piece [like that], but I want to make it bigger.

I just go with the flow. I don’t worry so much about the next exhibition.

The featured work of this exhibition is the piece “Enjoying the Midnight Sun.” Could you explain the meaning and process behind this work?

I’m influenced by my surroundings here in Iceland. Especially in the summertime, things become magical and bizarre. Sometimes the light is so strong. And then everybody’s locked inside their apartments, they’re not out in nature, they’re just looking out the window. So this piece is a bit about isolation. 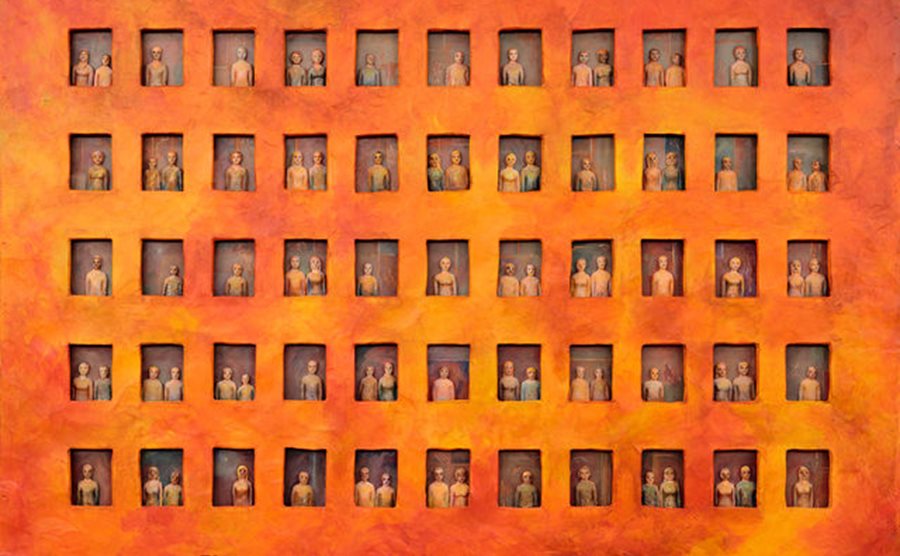 As Hakon said, she doesn’t like to spend too much time worrying about the next exhibition. While we wait to find out where we can see her next show, visit her site for more insight into this uniquely Icelandic artist. 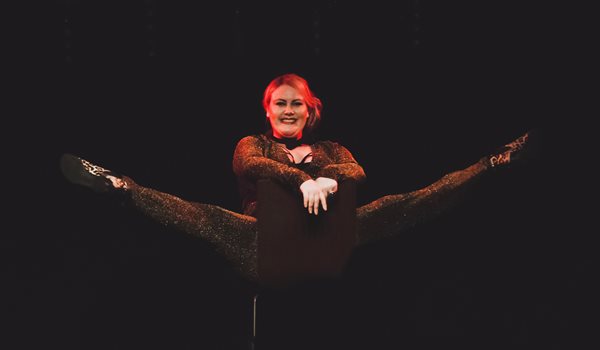 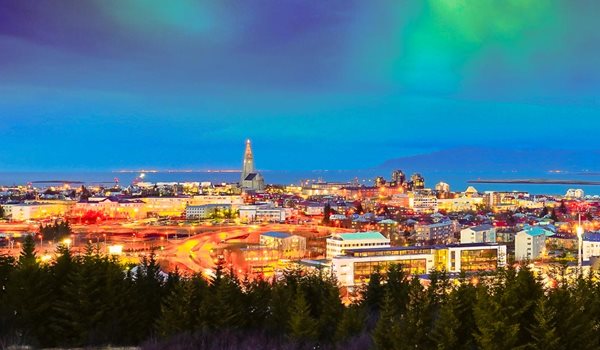 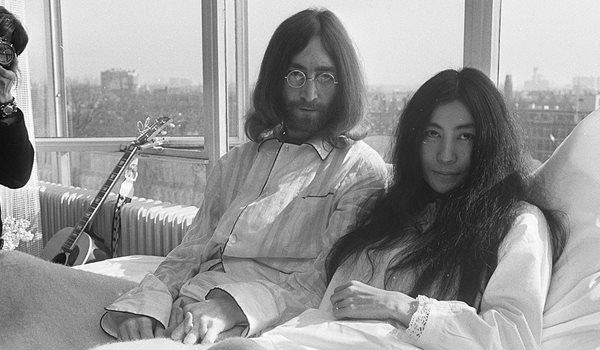